39 members and 1 visitor attended our June meeting when Chris South came along to give us a talk and demonstration on “Masterclass in Propagation”.

Chris tutors at Elmstead Market and was very knowledgeable and passionate about horticulture. She showed us the best way to sow seeds (most of us sow too many) and a number of cuttings. She also showed us how it was possible to take several cuttings from one leaf of a houseplant. Even the most avid gardener amongst us felt that we learnt a great deal and I’m sure lots of people will now be trying out her ideas.

Our next meeting is on 28th July and is our annual social night. This year’s theme is “Mad Hatters Tea Party”.  This is an opportunity for those of you who wish to dress as your favourite character from ‘Alice in Wonderland’ or ‘Alice Through the Looking Glass’ or please just come and enjoy the evening. There will be Themed Goodies to eat and Drink, Quizzes and of course a Raffle appropriate to the occasion. Have you considered making a ”Mad Hat” to wear to the Party – there’s a thought……………..

Cost to non-members is £5.00 and we would appreciate knowing in advance to assist with catering. Contact numbers are below.

A meeting of Winstred Hundred Parish Council will be held at Abbotts Hall Farm, Great Wigborough at 7.30pm on Tuesday 9th June 2015

PAWS May – Trek for Life 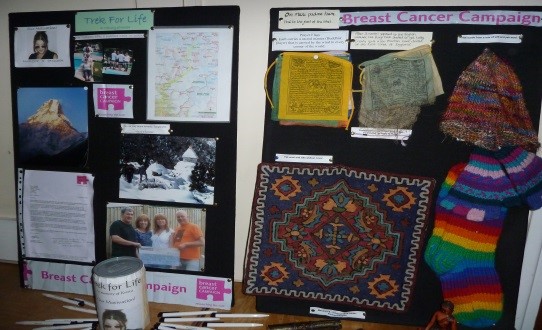 39 members and 1 visitor attended our May meeting when Tina Oldfield gave us a talk on “Trek for Life.” Tina’s daughter was diagnosed with Breast Cancer in 2004 at the age of 24 having been told on 3 occasions that it was nothing to worry about.  She fought the disease for 2 years before dying at the age of 26 leaving behind a husband and 2 young children.

To help with her grief and to do something in her memory Tina and 3 others decided that they would do the challenging “Trek for Life” to Everest Base Camp.  After 13 months of training, obtaining sponsorship and equipment from companies like Rock Face they set off in the Easter Holidays of 2006.

She showed us slides of the various basic lodges they stayed in along the way together with the incredible landscape and birdlife.  Their two porters carried their equipment and clothing which they needed as they climbed to higher altitudes and their guide mapped out their route.  At various times they suffered with altitude sickness and found it difficult to even eat (apart from Mars bars which never posed a problem) and supplemented their meagre diet.

At just 500 meters from Base Camp they got snowed in and upon the advice of their guide that it would be impossible to continue in the time that they had allocated for this trip they had to go back down.  It was just as well they took the advice as they heard that 3 Sherpa’s had died in a landslide the next day.  However there and then they made a pact to come back the following year to complete the walk that they had begun and indeed successfully completed it then.  It was an amazing feat and something we all thought was fantastic.  Tina continues to raise money for breast Cancer and, on this occasion, she is donating half her fee to the Nepalese Earthquake cause.

Our next meeting is on June when Chris South will give us “A Masterclass in Propagation.”

Details of all our meetings and speakers can be found on the diary of the home page of the Winstred 100 website.  If you would like further information about P.A.W.S please ring either of the following committee members: Alice Holmes 01206 735510 or Jane Anderson 01206 735505.

Gordon Davis of Abberton & Langenhoe Parish Council is organising a tour of the main local properties affected by the Great East Anglian earthquake.  Meet at Abberton & Langenhoe village hall at 2pm on Sunday May 31st.  Please book in with Gordon on 01206 735395 to help with catering numbers.

The Colchester earthquake, also known as the Great English earthquake, occurred on the morning of 22 April 1884 at 09:18. It caused considerable damage in Colchester and the surrounding villages in Essex. In terms of overall destruction caused it is certainly the most destructive earthquake to have hit the United Kingdom in at least the last 400 years, since the Dover Straits earthquake of 1580.

At 9:18 am the earthquake struck, centred mainly in the villages of Wivenhoe, Abberton, Langenhoe, and Peldon causing the surrounding area to rise and fall violently as the waves spread, lasting for around 20 seconds. Measuring 4.6 on the Richter scale, the effects were felt across England, as well as in northern France and Belgium.

The earthquake damaged about 1,250 buildings, including almost every building in Wivenhoe and Abberton, and in settlements all the way to Ipswich. The medieval church in Langenhoe was significantly damaged, as were those in the villages of Layer-de-la-Haye, Layer Marney, Layer Breton, and Peldon. In Peldon, the local newspapers claimed that every building had been damaged in some way. The Guardian reported that the earthquake was greeted with terror by the people near Colchester.

There are some reports that between 3 and 5 people were killed by the earthquake, but this has been disputed by other contemporary accounts. The Times reported damage “in the many villages in the neighbourhood from Colchester to the sea coast”, with many poor people made homeless, and estimated the cost of the disaster at £10,000. It did, however, mention the death of a child at Rowhedge, attributed to the earthquake. The large waves caused by the earthquake destroyed many small craft.

It is believed that the earthquake resulted from movement along a fault in the ancient Palaeozoic rocks that underpin most of Essex, causing waves to propagate through the overlying Cretaceous and Tertiary layers.

As is often the case, it is not always the strongest earthquakes that cause the most damage, and the British Geological Survey estimates that the 1884 earthquake’s magnitude was only around 4.6 on the Richter Scale, compared with 6.1 for the 1931 Dogger Bank earthquake.

Langenhoe Church was badly damaged. Masonry tumbled off the tower, crashing into the roof of the nave and chancel. The nearby rectory was also damaged.

Note – Wikipedia is subject to change over time – click this link to view the current article.

A meeting of Winstred Hundred Parish Council will be held at Salcott Village Hall at 7.30pm on Tuesday 12th May 2015 which will be:

Electors and Organisations are invited and can contribute to this meeting.

Addresses from any of the following may take place: County Councillors, Borough Councillors, Police and any other body or organisation.

Election of Chairman, Vice Chairman, Financial and Responsible Officer; elected, co-option or resignation of Parish Councillors and signing of all necessary forms and declarations.

New Parish Councillors welcomed and gratitude expressed to those outgoing.

The next meeting will be on Tues 9th June 2015 at 7.30pm at Abbotts Hall Farm, Great Wigborough 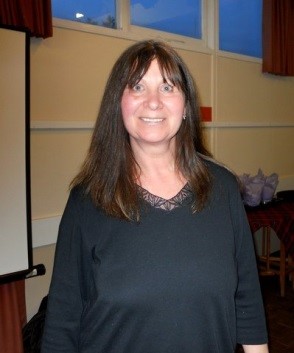 39 members attended our April meeting when Mrs Denise Hammond-Webb took us on a journey from Suffolk to Ontario,Canada.  Her great, great, grandfather, Nathaniel Hammond was born in Chelsworth, Suffolk on 8th March, 1851 and was the 6th child of ten.  He grew up to be a farm labourer and married Charlotte Hollocks in 1875.  They both lived in a tied cottage on a farm in Semer which funnily enough was called Canada cottages.

As their family grew, huge changes in mechanisation on farms were sweeping the country and many thousands of agricultural workers were no longer needed.   George, the 8th child of Nathaniel & Charlotte, decided to try his luck in Canada.  At the time adverts were everywhere offering grants for free land and assisted ship passages with great opportunities in Canada & Australia.

In September 1912 his father Nathaniel & Charlotte with their three youngest children followed George to Ontario and settled in a village called Thamesford.  Very sadly both Nathaniel and Charlotte died of the Spanish Flu epidemic in 1920.  Over 500 million people worldwide died of the Spanish Flu. However their children went on to become successful landowners and dairy farmers in Thamesford and now also grow wheat, hemp, tobacco and produce maple syrup.

Our next meeting is on May 26th when we will hear about “Trek for Life” with Tina Oldfield.

A meeting of Winstred Hundred Parish Council will be held at Peldon Village Hall at 7.30pm on Tuesday 14th April 2015

The next meeting will be on Tues 12th May 2015 at 7.30pm at Salcott Village Hall which will also be the Annual Assembly Meeting

46 PAWS members attended the March meeting which was also their AGM.

As well as the business of the evening, whereby the committee and President were elected, we also enjoyed a “sweet supper” together with a quiz, a chocolate tasting and Easter Bonnet competition.

Two of the existing committee stood down with one new member, Kate Neville, being elected and Sue Copeland was elected President with Pam Foakes as Vice-President for the forthcoming year. Bouquets were presented to Gen Fretwell, the outgoing President and Jane Banks and Julia Dymond as a thank you for all their hard work on the committee over the years.

The winner of the Easter Bonnet was Diane Cornes (photo right). Jean Hedger (photo right) was also presented with a certificate in recognition of all her hard work on the Sales Tables.

Chris Mutch, our speaker, talked to us about the benefits of Magnetic Therapy in a piece of jewellery and did a hefty trade afterwards.

A meeting of Winstred Hundred Parish Council will be held at Abbotts Hall Farm, Great Wigborough at 7.30pm on Tuesday 10th March 2015

41 of us attended the February meeting to hear Chris Farndell’s talk on Photography – Crime Scene to Art. Chris is an ex Colchester Police Officer who for the last 17 years of his career in the force was a Scene of Crime Officer. This involved photographing evidence to assist with the prosecution of cases. This proved to be very diverse covering road accidents, personal injuries, graffiti, fires, footprints and fingerprints etc. He had numerous slides showing us some of the cases he had been involved in. After retiring from the Police Force he taught Photography at 6th form college in Colchester. He showed us a number of beautiful photographs in and around Venice showing how different apertures and exposures resulted in stunning photos. He also had a selection of cameras and photos for us to look through. He was a really interesting speaker and his talk was enjoyed by all that were there. Our next meeting is on the 24th March and is a closed meeting as it is our A.G.M. We will be having a Chocolate Tasting, Cake Sampling and a Quiz. There will also be a prize for the best Easter Bonnet.

Membership is currently closed but visitors are welcome (other than the A.G.M.) at a cost of £5.00 which includes refreshments.