At the meeting on September 27th, Jackie introduced the speaker for the evening, Andrew Wiltshire from Danbury.  Andrew has written a book entitled “Beatrix Potter’s Secret Code Breaker.”

He started his talk with a series of questions “How much they knew…:

He then explained that Beatrix eventually lived at Castle Cottage in the Lake District, after her marriage to William Heelis.  However, she originally used the neighbouring Hill Top farm as her ‘writing room’ in which to write and illustrate her much loved children’s books.  These two properties, with others and over 4,000 acres of Lake District countryside, were left to the National Trust in 1943.

Before moving there, Beatrix had written, for 15 years in a secret cipher-code of her own invention, a Journal describing observations on her family life in London, the politicians and artists that her parents knew, and many other fascinating details of her life in late Victorian times.

These documents were eventually found in Castle Cottage after Beatrix’s death. Andrew continued by telling us that he knew Leslie Linder, the code breaker. He first spent five years looking for a way into the code.  He then spent a further eight to translate and bring to life the 200,000 words that Beatrix had written.  These were in many exercise books, and on very many loose pages.

This quest became Leslie’s ambition so too, sharing what he found; he did this by publishing Beatrix’s journal 1966.  During the 13 years of this work he amassed what has become the world’s largest collection of Beatrix’s art and writing.  He eventually donated the collection to the Victoria & Albert Museum before his death in 1973.

Illustrations of the code and some humorous examples of what Beatrix had written were complemented by photographs of Leslie’s life and family background.  Andrew presented a fascinating insight to someone whose past is now forgotten and a period of time, Beatrix’s early life, that is also, hardly remembered.

Several questions from members, as well as some of them also recollecting Buckhurst Hill, the town where Leslie lived, closed a very interesting talk.

PAWS’ next meeting is on 25th October and Philip Lyons will talk about “A Sailors Life”.  Visitors can attend regular meetings at a cost of £5.00.  You can find details of all meetings and speakers on the calendar on the home page of this website. If you would like further information about P.A.W.S please ring either of the following committee members: Alice Holmes 01206 735510 or Jane Anderson 01206 735505 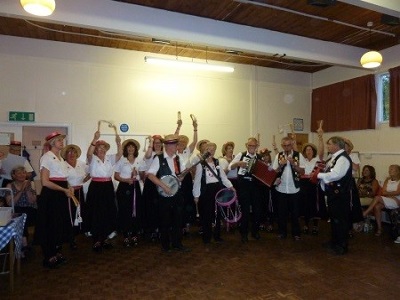 One of the dances

Our meeting on 26th July, was our annual July Social, and was well attended with 44 members and 2 visitors. We first attended to business and then had a wonderful Fish and Chip Supper.  After supper we were entertained by Bows “n” Belles, a Colchester Clog Dancing Group. END_OF_DOCUMENT_TOKEN_TO_BE_REPLACED

Skip to content
This Website is committed to ensuring digital accessibility for people with disabilitiesWe are continually improving the user experience for everyone, and applying the relevant accessibility standards.
Conformance status
Developed by AGHAI Business Website
We use cookies to ensure that we give you the best experience on our website. If you continue to use this site we will assume that you are happy with it.OkPrivacy policy